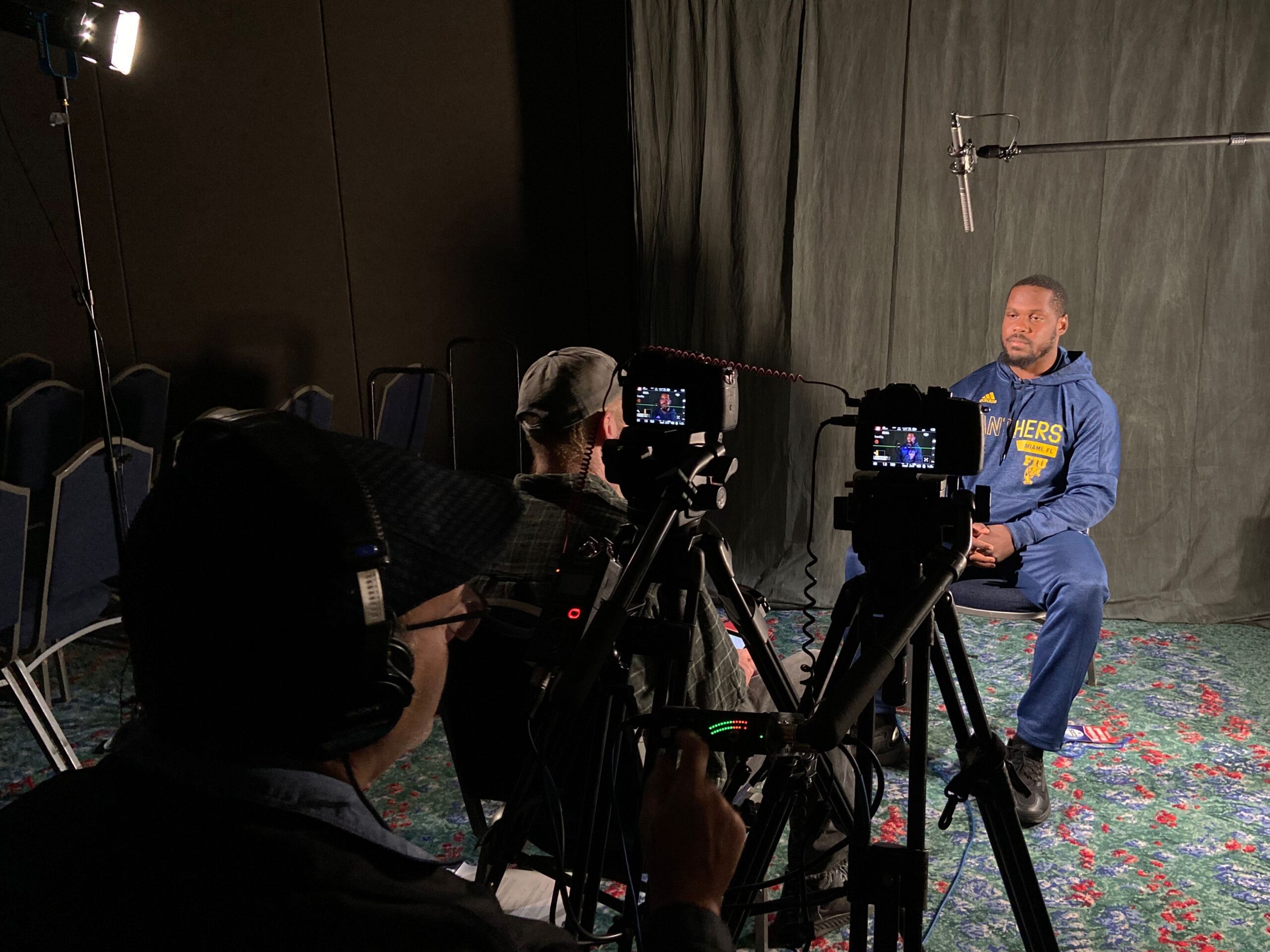 Agility Matters in Football and TV

Agility Matters in Football and TV

The agility of high-level American football players has always amazed me. 300-pound men change direction instantaneously as they pursue their missions of either protecting or demolishing a ballcarrier.

We saw a lot of agility among the guys in pads as we produced a television program about the College Gridiron Showcase this year. The event, in fact, revolves around former college football players trying to show pro scouts how nimble, strong, ferocious, and/or intelligent they are. They’re high-level performers – young men who excelled as amateurs hoping to show they’re truly elite. So our crew got to see some good football.

We also discovered we needed to be agile ourselves, and not just because videographer Suzanne Wilemon isn’t afraid to push the limits of how close one should get to a pileup involving guys up to a foot-and-a-half taller than her.

We first had to find a way to get the show shot. We didn’t have the financing or distribution in place by the time the event rolled around, and at the time we believed the football calendar to be an immovable object. The CGS had to happen in January in Fort Worth and we had to shoot it. So we called in some favors and pulled a few double shifts. We emerged with a lot of interviews, football footage, and a whole lot of great narratives involving young people trying to realize their dreams.

Our goal had been to create a series in which we would take deep dives into players’ stories using CGS as a common core element. We would conduct additional interviews, go to their hometowns, and generally let the audience engage with their whole life situations.

Then we had to pivot. As we worked on financing and distribution, the production world abruptly came to halt. NFL and CFL calendars normally propelled by pro days and live drafts came to an unprecedented halt.

The pandemic meant we wouldn’t be doing any more interviews or shoots.

So we took a look at what we had. And it turns out we had a lot. One thing we always liked about CGS from a production standpoint was that we could shoot efficiently, with a lot of players in one place. And we had some great stories we could still tell, including:

So we decided to make a show from it. It wouldn’t be a series, but instead a one-hour capsule summary that revolved around the CGS chapter in these player’s lives. Mixed in with the football angles, we worked in how they prepared for life off the field. That part included powerful testimony from rape survivor and activist Brenda Tracy that made these 20-somethings really consider matters of character.

By the end, we thought we had something people would want to watch. Executives at a couple of networks agreed with us, but those deals fell apart when others in the organization didn’t share their vision. That led us to choose to distribute the show via broadcast syndication.

The broadcast syndication process involves placing a program individually on local stations throughout the country who agree to carry it. There are a number of groups who own many such stations and a couple of those, Nexstar and Scripps, agreed to offer it to their local decision-makers.

I was on a Zoom call with one of my business partners in late July and I checked my email when I got done. I’m not sure I had ever before received an email from Grand Junction, Colorado, but the one I read that day was from that city’s CBS affiliate. KREX wanted the show. We had our first broadcast outlet. No matter how many emails I get in the future from Grand Junction, that will always be the best one.

A number of other stations followed and we have gradually built up our coverage to a significant portion of the country. I think one of the things our team is most excited about is that the road wasn’t smooth, but we eventually found our way to where we wanted to be. One has to be agile.

We also try to provide a package to our partner stations to allow them to be agile. We supply promotional spots of multiple lengths (you don’t know useful that is until you’ve found yourself hunched over a computer terminal trying to fill in the holes on the log of a typical broadcast day), social media content (including versions without voiceover so they can let their own sportscasters voice them for added localization), and materials to facilitate earned media. We want to give them the tools to drive viewers to their stations.

Thanks a bunch to our sponsors – we could not have pulled this off without them:

Here is the list of stations and the days/times they will air (or have aired already) the College Gridiron Showcase. I’ll continue to update this list as our partners let us know when they’ve added us to their schedules. This list represents only the ones who already scheduled the show – many more have committed to do so before the end of 2020. We will continue to add stations, too, throughout the fall.

All times listed are local. Schedules are subject to change due to factors like live sports and breaking news.